Pocketdroid has come across some new info regarding the mysterious Samsung I9300 unit, that’s actually not the Samsung Galaxy S III, as everyone speculated at some point. Now we found out that we’re dealing with a 4 inch 720p smartphone with an AMOLED display. 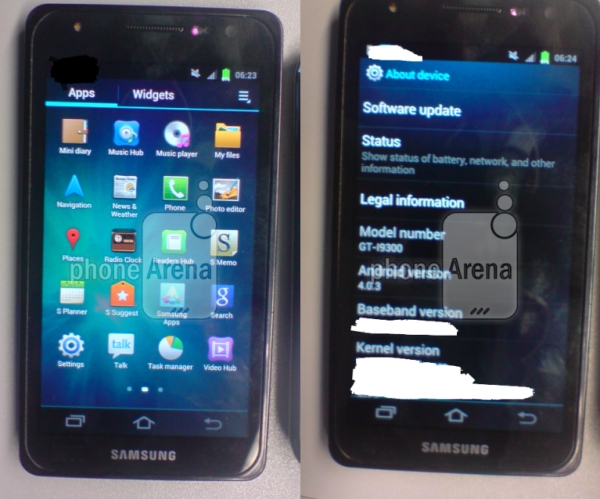 The device is most likely based on a PenTile RGBG screen and it comes with a Samsung Exynos CPU, a dual core 1.4 GHz processor and Mali 400 MP GPU. Add to that 1GB of RAM and Android 4.0.3 ICS and you’ll get a pretty picture of what this model is about. This model, that would fit the name Galaxy S II Plus, since it brings a little bit of extra, but also makes the diagonal will hit the market in May, according to the latest rumors. And if other recent speculations are to be believed, Samsung will have its hands full in May, launching both the Galaxy S III and this mystery unit.

Samsung GT-I9300 seems to keep TouchWiz and I wonder if this version is superior to the one on the Galaxy S II, I mean back in the Gingerbread days. Notice the trademark ICS capacitive buttons, that will become a standard on all Android devices with version 4.0 preinstalled… Would you buy this phone for a $150 or so price tag on contract?