Samsung France has made official some info concerning the company’s future plans for this year. They appear to include two new Bada OS 2.0 devices launched in the following months. These are expected in the second half of the year, with one dropping in September (Hero Wave) and the other in November. 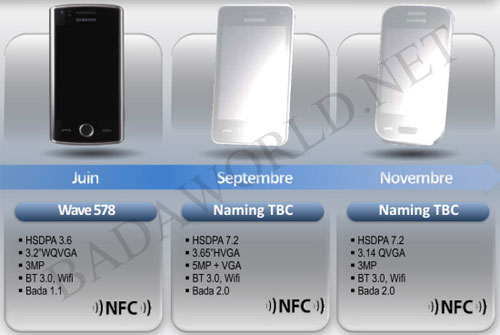 The first model is a flagship phone, that packs a 3.65 inch display, 5MP rear camera and VGA front cam. There’s also WiFi on board, Bluetooth 3.0, NFC and HSDPA (7.2 Mbps). The other model is a mid-range unit that will be released in November and we have no official name for it, yet. It will feature a 3.14 inch display, support for HSDPA (7.2Mbps), a 3MP camera and Bluetooth 3.0.

This image above doesn’t only include placeholders, so the design traits seen here will be present on the final units.