Samsung recently offered some details on its future plans, that seem to include predictable stuff like 64 bit CPUs made by Sammy itself. Also, they include 4K displays on phones and more of that is detailed below. 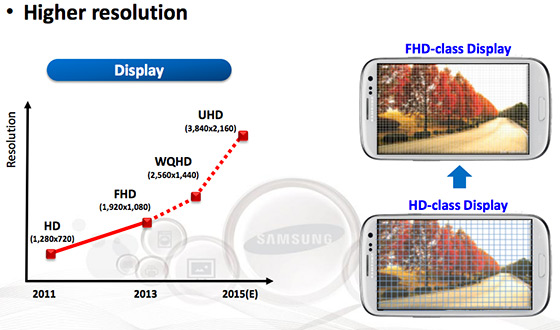 The news comes from Samsung’s Analyst Day event in Korea and the screens will be the focal point of the evolution. The Korean company’s future involves sharper displays and Samsung could release smartphones with 2560 x 1440 pixel resolutions and density as high as 560 ppi. 4K Ultra HD resolution handsets are the next step, considering 2K phones are already out there.

Around 2015 we may even see phones with 3840 x 2160 pixel resolutions, that would be obscene, in lack of a better word. Samsung is also developing its brand new ARM processor, a 64 bit one, but they will also rely on Qualcomm’s solution as an alternative. Also, they keep working on flexible device initiatives. How good does that sound?