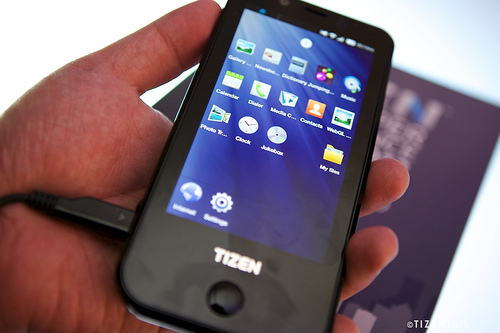 Tizen is a Linux-based open source platform that has just reached version 1.0 for its source code and SDK release. Tizen Talk found the phone you see here at the Tizen Developer Conference in San Francisco and said that a bunch of companies are using the device to demo their products. The handset is made by Samsung, with the photo you see above being taken at the booth of the South Korean company. This reference design gizmo uses an ARM-based 1.2 GHz dual core CPU, a 4.3 inch display with a 1024 x 720 pixel resolution and what looks like a bulky case.

Sprint recently announced that it will be the first North American carrier to join the Tizen initiative and the list of partners is becoming really impressive, with the likes of Orange, Vodafone, NTT DoCoMo, SK Telecom, Intel and Samsung also being part of the project. I’m curious if Tizen and Bada will fuse in the Samsung portofolio, or if they’ll give up Bada in favour of this OS. Hands on experience with their prototype below: