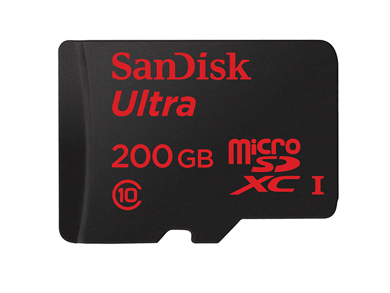 Such cards are priced at $249 on Amazon and they’re perfect for Android smartphones and tablets. The transfer speed is up to 90 MB/s for this product, meaning you can transfer up to 1200 photos in a minute. The card can hold up to 20 hours of Full HD video or up to 9 hours of 4K video. SanDisk’s new microSD product is a Class 10 one, that’s waterproof, shock and temperature proof as well.

It’s magnet and X-ray proof and comes with an SD adapter. Preliminary tests have shown that these cards are compatible with the likes of LG G4, Motorola Moto X Pure, Galaxy Grand Prime, Galaxy Note 3 and Galaxy S5 for example. HTC One M9 also supports such cards and the latest LG phones come with compatibility for up to 2 TB cards.