People actually spend more time using their smartphones for navigating the web, rather than calling people or receiving calls, according to a new research. Not that it’s anywhere near surprising, but social networking is also above calling, when it comes to the amount of time users spend doing that on a smartphone. 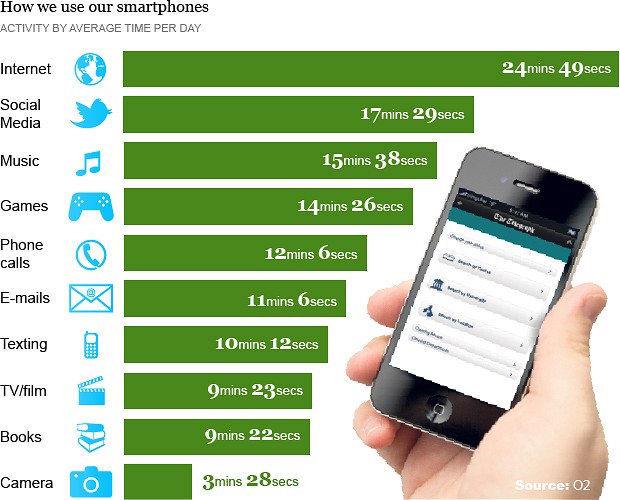 The study was done by British carrier O2 and showed that the average consumer spends over 2 hours each day using his handset. In that time frame, smartphone owners spend 25 minutes browsing the web, 17 minutes on social networking and 13 minutes playing games. Meanwhile, music gets 16 minutes and phone calls only get 12 minutes, slightly popular than emails with 11 minutes and texting, with 10 minutes. In spite of the fact that people spend just 3 minutes taking photos with a handset per day, photography is the feature that most people use on a smartphone.

74% of owners said they’ve taken photos using their smartphones. It’s clear the high end mobile have buried some other gadgets, such as watches, point and shoot cameras and even laptops. After all, you can now have a quad core powerhouse in your pocket easily and do everything you do on a laptop using it.