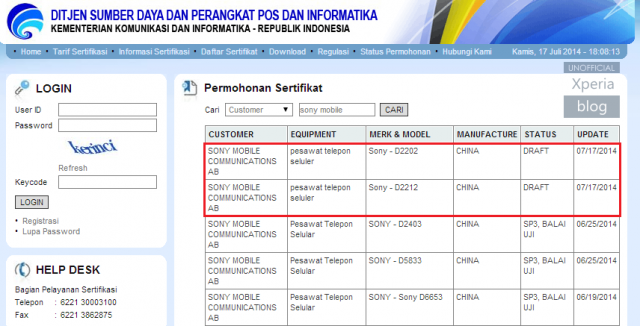 Recently, on an Indonesian regulatory website, two new Sony devices showed up, more precisely the Sony D2202, and the Sony D2212. As you can see in the picture belowe, these devices arrived in Indonesia on July 17 from China.

Both Sony D2202 and D2212 will be other entry-level Xperia handsets that could be launched this year at the IFA 2014 show that will take place in early September. Looking at Sony’s portofolio we see that these models will sit above the Xperia E1 (D200X) and E1 Dual (D210X), but below the Xperia M2 and M2 Dual (D230X).

Unfortunately, there’s no other info about these new devices. It remains to see if in the next few weeks we’ll some more leaks with these phones or contrary.