Among the many products that will be shown at Mobile World Congress 2010, there’s also SPB Mobile Shell 5, as proved by the invitations sent by SPB Software to the folks attending the event. The SPB Booth will be found in Hall 1 1A40 and Hall 2 2B05, between 15 and 18th February, in Barcelona. 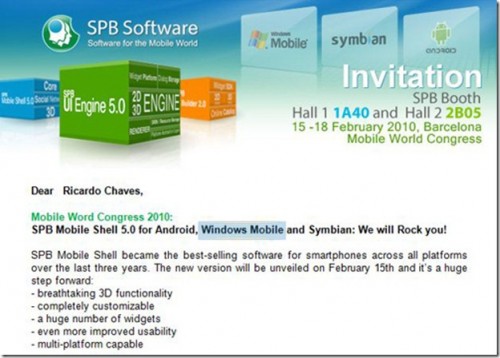 SPB Mobile Shell 5.0 will be shown in its version for Android, Windows Mobile and Symbian. Among the features of the version there will be 3D functionality, tons of customizable options, many widgets, better usability and multi-platform support. We remind you that SPB Mobile Shell is a very popular UI replacement and software suit on Windows Mobile.

Version 5.0 will finally put the 3D-supporting hardware to good use and we expect great widgets and a kickass interface.