A Phone Arena tipster has just sent them some very interesting information regarding Sprint’s 2010 upcoming phones, that you can see in the huge list below. Click on the image for a more expanded view of the list and remember that this is not officially confirmed info: 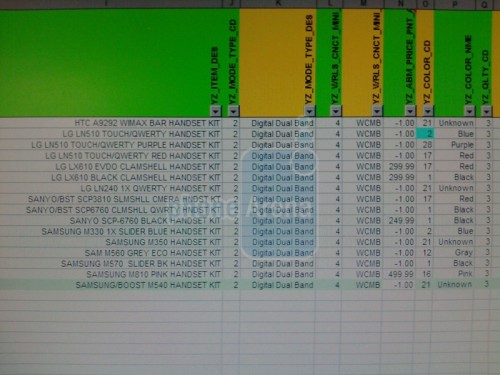 Turns out that HTC is readying a WiMAX candybar for Sprint in 2010, bearing the codename A9292, but no specs have been posted online just yet. Next, we come across the LG LN510 model, a touchscreen phone that also packs a QWERTY keyboard, probably designed for messaging freaks. Another texting phone on the list is LG LN240, an affordable phone, that’ll probably lack EVDO support.

LG LS680 could be a high tech smartphone, so maybe we’ll see it running Android, just like the GW620 model. Samsung is also present on the list with a bunch of devices, like the M350, a basic touchscreen handset, the M570, a possible successor to the Exclaim and the M910, that may in fact be the Android-based Moment 2.

Palm C40 is not novelty, since we’ve already seen it in Sprint’s inventory system, while the P100 and P120 have proved to be Pre and Pixi. BlackBerry Tour 2 9650 is also included in the leaked list, complete with BlackBerry OS 5.0 and WiFi, as is the BlackBerry Pearl Flip, also to come with upgrades.

Sanyo also has a smartphone planned for Sprint, with the codename 8600, while Moto has a mysterious MS400 model lurking around, maybe running Windows Mobile (7?). There’s also some love for Nextel iDEN users, too, through the Motorola i1 full touchscreen Android 1.6 phone with a 5MP camera on board and the black version of the Clutch handset, plus the i680 and i890.

The i680 will probably be a rugged device with a 2 megapixel camera, while the i890 is only a mystery now.

Thanks Dimitar for the tip!