Here’s Steve Ballmer with HTC officials… and something else as a bonus. Notice the spots on his shirt? Is that drool because of the Windows Phone 7 launch or simply some perfume sprayed in a hurry? Perhaps it’s the already famous sweat stain from back in the days when Ballmer was chanting “Developers, developers, developers!”. 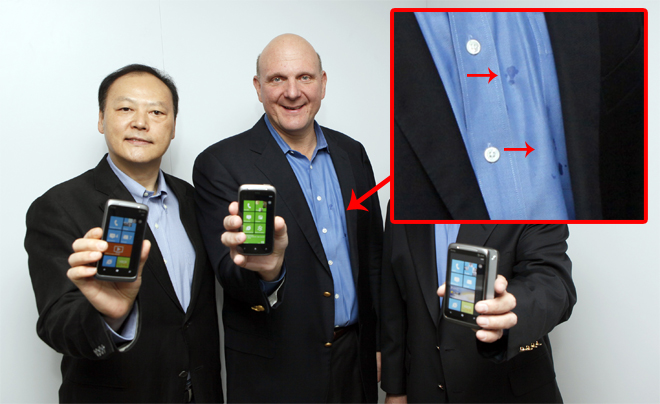 In case this is drool, Ballmer must’ve pulled a Pavlov’s Dog Effect on us, taking too much pride in WP7 and getting too excited. That shouldn’t be the case, since the platform might be OK for now, but we have to see it in action and reaching the mass consumers before we can say it destroys Android or iOS.

Meanwhile, here’s a taste of the old Ballmer and I’ve got to say that I like the new one better. Calmer, more focused… that’s OK.