Barron’s Magazine recently did a piece on Steve Jobs, the famous Apple CEO, that basically defines and guides the company towards its prolific and profitable future. The magazine recently released its annual list of the best CEOs in the world, with Steve Jobs being mentioned as “the world’s most valuable CEO”. 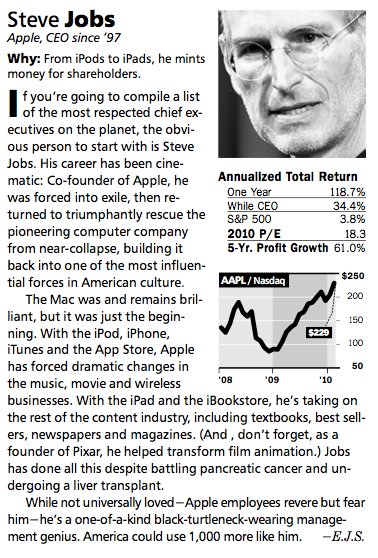 The list also includes Jeffrey Bezos from Amazon, Warren Buffet of Berkshire Hathaway and Mark Hurd, HP’s main man. Jobs is a strong man, having overcome cancer and now he’s back at Apple, after taking a medical leave It’s interesting to notice that the health issues of the Apple guru have affected the company’s stocks, demonstrating his importance for the brand and tech industry.

The iPhone maker recently reached a record market value of over $200 billion, showing that the healthy Jobs is a guarantee of the company’s success. Believe it or not, the famous keynote man with turtleneck is worth $25 billion or more of Apple’s market value. How many men, let alone CEOs can say that about themselves?