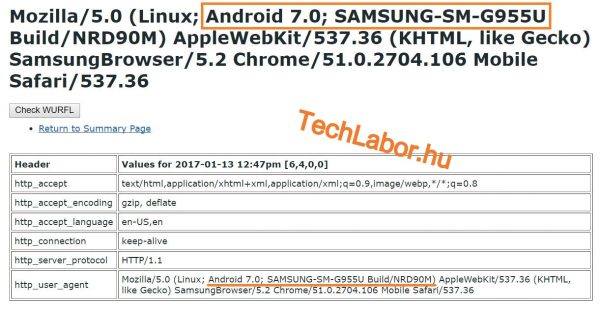 The series of Samsung Galaxy S8 leaks continues, today with an user agent profile of the device popping up. It appears it’s actually the Samsung Galaxy S8 Plus, according to the source, Hungarian site techlabor.hu.

The device is listed under the codename SM-G955U and the user agent thing means the appearance of a device within the stats of a website. It’s basically the handset’s “print”, the digital print left behind by any device after accessing a website (know more about websites at https://www.spamzilla.io). This print lets one identify the maker and model of the product. Stats sites like Google Analytics and control panel for websites gather such info.

Anyway, we seem to be dealing wit a newcomer here, as the codename SM-G955U shows, since, the Galaxy 7 Edge had the codename SM-G935 and South Koreans are superstitious about the number “4”, so they skipped it. The only thing we can gather from the leak is that the phone runs on Android 7.0 Nougat. The device is expected to come in two versions, the basic S8 and the S8 Plus, with a Snapdragon 835 or Exynos 8895 CPU and 6 or 8 GB of RAM according to the source.

Both models should have a curved screen, so the Edge thing is no longer separate. An April release is expected.