T-Mobile Pulse will make its entry on the Dutch market on October 12th, as the poster below claims, also mentioning cool specs like the latest Android OS (1.6 most likely), a 3.5 inch screen and direct access to all Google Apps (Gmail, Google Maps, Google Talk and more). 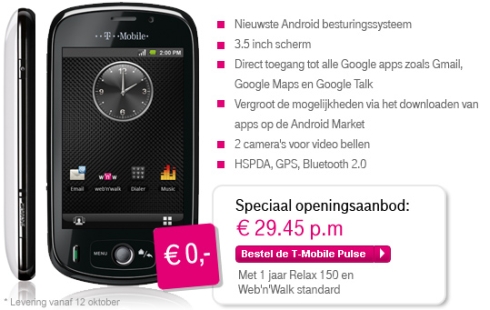 Pulse also packs a 5 megapixel camera and the above mentioned screen is a TFT touch display, while the specs list of the new Android phone also mentions a Qualcomm MSM 7200A 528 MHz CPU and 288 MB RAM. 512MB ROM are also on board, together with a battery that provides 480 minutes of talk time and up to 750  hours of standby.