Since handset makers such as HTC and LG have already had their big time leaks over the past weeks, it’s now the turn of carriers to leak as if there’s no tomorrow. I’m talking about T-Mobile here, that has released a roadmap of every device that it will put out in the next 60 days. 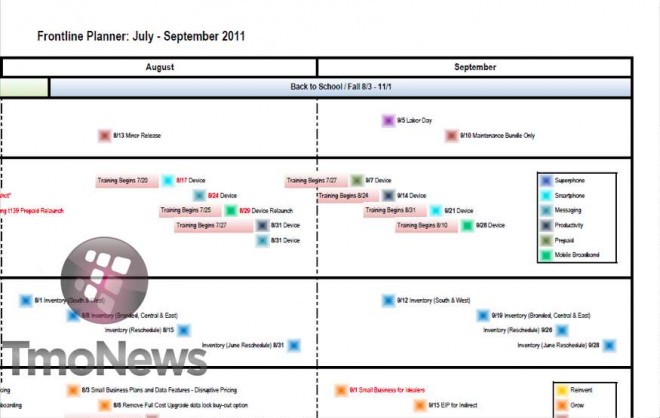 Sadly, no labels have been applied to be products in the roadmap pictured above. This causes a bit of confusion and we still don’t know which models are rumored and which are real devices. Actually this is a pretty useless leak, unless you’re familiar with the carrier’s plans. The Samsung Hercules might be on this list, but I wouldn’t count out some Windows Phone Mango models, especially since the roadmap covers the Back to School time frame, when the OS will come out.

BlackBerries make out most of the upcoming portofolio of products, I’m sure, plus a Samsung Galaxy S II version or two… Maybe some new Droids from Moto as well?