The famous T3 publication has recently started an initiative meant to find the Gadget of Year 2010 and there’s also a “Phone of the Year” category that might interest you. 10 devices are competing for this title, made by various companies, like Motorola, Nokia, HTC, Samsung, Apple and Sony Ericsson. 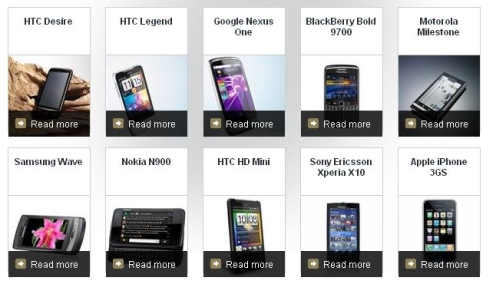 HTC is the company with the most handsets, Legend, Desire, HD Mini and Nexus One, while Moto gave us the Milestone, RIM has the BlackBerry Bold 9700 to show off and Apple its iPhone 3GS. Against these Nokia competes with the N900, while Samsung takes the Wave Bada OS phone into the game. Finally, the XPERIA X10 is Sony Ericsson’s participant in the competition.

The jury will also have its say, not only the users’ votes and we have to mention that the folks who vote have a chance at winning devices like a PS3, an iPad, a HTC Desire handset and much more. The T3 experts have already compiled lists of gadgets, 10 for every category (18 categories in total).

The selection will be taken down to 5 gadgets per category in July and the winners will be announced in October.