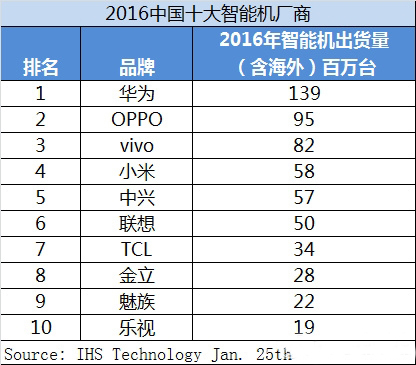 China is not only the biggest smartphone market in the world, but it has become such a big trendsetter, that Tim Cook regularly visits it and Nokia has chosen it as the land of its return to the biz. Today we learn which were the best selling phone brands from China over the past year and to nobody’s surprise Huawei is placed first.

Kevin Wang, director of IHS Technology Research in China has created this top 10 based on the millions of units shipped globally by each company. Ambitions were high at the start of last year, but some of the firms couldn’t meet their expectations and predictions. Here’s the top 10:

As you can see, Huawei is first, with 139 million units, while Oppo is a distant second, with 95 million units. Vivo is third, with 82, but seeing how the two come from the same holding, they would actually make the first spot if combined. Xiaomis placed fourth, with a disappointing 58 million units. Interestingly, OnePlus didn’t make the top 10 and the last position is held by LeEco, with 19 million units, even though the company had a rough period financially.

It would interesting to know if Lenovo’s figures here only included their own models or the Moto ones as well, since they’re doing worse than I expected. Aside from OnePlus, I’m surprised to see there’s no trace of Uhans, Leagoo, UMi, Elephone and a few other brands that seemed to rise over the past year.