In spite of the analysts predicting that in the next 3 years Windows Phone will take over the market share from Android, it seems that right now Microsoft is disappointed with the evolution of Windows Phone 7. MS reported earlier this month that it has experience lower than estimated sales for WP7 units. 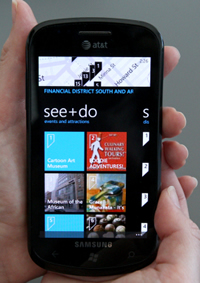 And now the software giant from Redmond seems to be ready to take matters into its own hands and start production of its own dual core LTE phones. The info comes from Windows Phone president Andy Lees, who detailed the direction of WP7 in a recent AllThingsD interview. Right now Lees is happy with the way the single core WP7 devices are facing the Android competition, but who knows that Tango or Apollo will need as far as hardware goes?

The purpose for Microsoft here, according to its official is launching LTE devices that don’t consume as much battery power as their rivals with Android. Lees has a lot of faith in Mango, that’s also the first OS to take Nokia for real into the battle of smartphones, although we’ve yet to see results in this segment. WP7.5 is said to be getting unit volume and market share as we speak, according to the same Lees.