Nokia Lumia 822 is the Verizon version of the Lumia 820, that has been leaked a bunch of times till now. Well, now we’re dealing with a fresh leak, that shows the Lumia 822 next to the HTC 8X, in California Blue. The tipster who leaked the pic also confirmed prices like $99 for the Lumia 822 on contract. 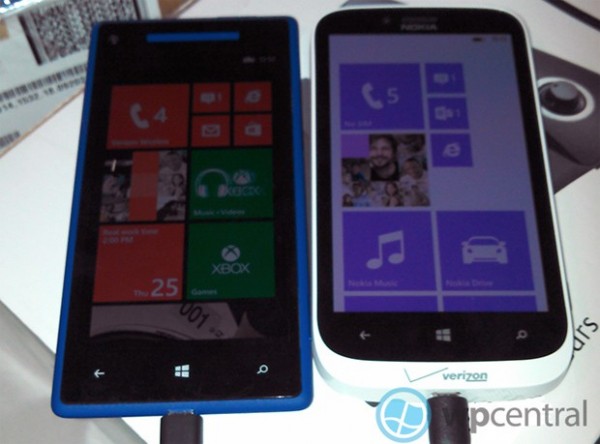 HTC 8X goes for $199 on contract, also on Verizon. The interesting thing here is that although there was a leaked document recently saying that the Lumia 822 would come on November 12th, the insider talks about a November 8th debut. AT&T is also supposed to be moving around dates, so nothing’s certain right now. Rumors also say that there’s a mystery Samsung device that will be free on the same carrier and it’s apparently not the Samsung Ativ S, but a new phone.

For those of you wondering, the Nokia Lumia 820/822 features a 4.3 inch ClearBlack Display, an 8 megapixel camera at the back, a Snapdragon S4 dual core CPU and a battery that provides 8 hours of talk or 330 hours of standby time. The device also has NFC, Bluetooth 3.0, wireless charging, LTE, Nokia Maps, Nokia Drive and Nokia City Lens on board.