Yes, ladies and gentlemen , it has arrived! HTC Magic is already selling in Spain and it’ll quickly reach the rest of the European countries, among which Germany, the country where the unboxing experience below was filmed. Let’s have a look at this very hot Android device. 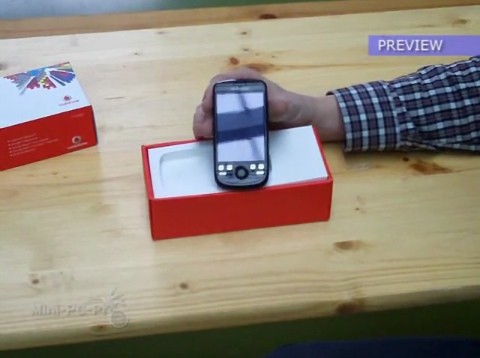 First, we learn that Magic is not that small, but it does have a good build quality and the first defect spotted by the “unboxer” is its glossy finish, which can be a fingerprint magnet. In spite of the handset being advertised in its white version on the majority of posters till now, this phone is black and it’ll be made available by Vodafone in Germany.

Inside the box you can find the warranty, an artificial leather sleeve, that looks and feels cheap, a headset, an USB cable and a power cable. The person checking out the handset points out that there’s a Google Search form at the top of the phone’s interface, an area for status messages and the Magic integrates the “Google Eco System” perfectly.

Google Android Market is also present, with a couple hundred of apps and you’ll like to know that this device allows you to access all of the Google services, once you log into your account (Google Talk, Google Calendar etc). Finally, the “unboxer” being a BlackBerry user, he notices that the handset’s trackball is pretty nice and easy to use.

Last, we learn that the video playback quality on this device is rather poor, or at least it’s like that on YouTube, but maybe this will go away with a future update.