It has come to this folks… iPhone concerts in large venues! And not just any venue, but the uber-famous Wembley Stadium, that hosted some of the most famous bands in the world. This time it’ll be Gary Go playing his iPhone on scene, at a series of Take That concerts, taking place in July. 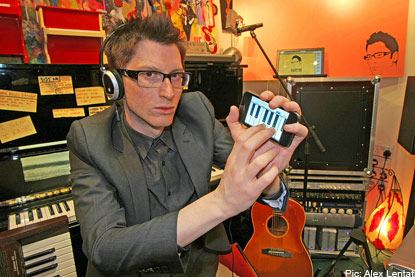 Go’s real name is Gary Baker and the man is a singer, songwriter and producer working with Take That. Baker has already written a couple of tracks for his first album, relying on iPhone software, which he used to recreate all the needed instruments (guitars, drums, piano and more). There’s also a virtual four track recording studio installed on the man’s device and used to lay down the final tunes.

Imagine a man, standing on a scene, in front of a huge crowd, iPhone in hand and getting ready for an uber-gig… If you’re a traditionalist, don’t fret, as some of Go’s songs will be performed with the aid of a live band, as well. This is not the first time we’ve seen the iPhone involved in professional music making, since the London group The Mentalists became highly successful on YouTube, after covering MGMT’s Kids using the handset.

Gary Baker’s performance will be a premiere, because it’s the first time a phone is used to perform in front of such a large audience. Go will support Take That on Wembley on 1, 4 and 5 July.