After being released with the Windows Mobile 6.5 OS, Windows Marketplace is now available for Windows Mobile 6.0 and 6.1 phones, but also desktop PCs. This is probably just another effort from Microsoft to try and surpass the popularity of the Apple App Store. 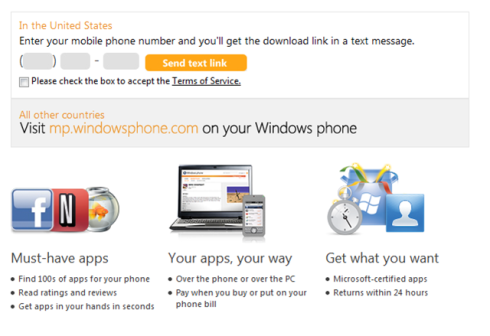 Microsoft launched its Marketplace portal last week, allowing users to download apps straight on their desktop PCs. You just need a compatible Windows Phone and a PC with apps on it, that will be synced automatically with the phone, once Marketplace runs on the handset. In order to download the Marketplace app on your 6.0 or 6.1 phone, you just have to point your handset browser to mp.windowsphone.com and follow the instructions.

Desktop users will click here to download the needed app and install Windows Phone via desktop. Microsoft expects 90% of its Windows Mobile apps to be compatible with the 6.0/6.1 smartphones, which means about 30 million Windows Phones internationally.