While most of us are anxiously waiting for the fall and the Mango update for Windows Phone 7, some lucky guys already have it and we’re not even talking about developers here. One of such lucky people is Alessandro Teglia, Community Program Manager for CEE & Italy, who tweeted that he’s playing with a HTC 7 Mozart unit with WP7.5 on board. 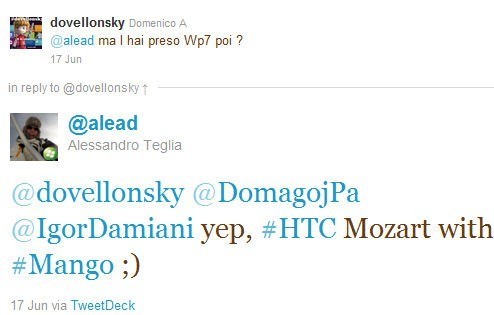 The same Alessandro mentioned that he was using Bing Music search on the device, meaning that this service also works outside the US and UK. As far as the HTC HD7 is concerned, this one was spotted at Computex 2011 (shown in the video below) running Mango. These two devices are a good indication of what models will get the upgraded first.

Now it’s time for Samsung to show the new OS some love… In the meantime, we can’t wait to get a taste of Internet Explorer 9 on mobile, improved multitasking and all the enhancements of Mango OS.