If you remember, back when we were at MWC 2012, there were cute Microsoft representatives going around Barcelona’s tech fair promoting the “Smoked” campaign. It was very easy: Microsoft challenged any smartphone out there to a dual with its Windows Phone units and usually the rivals were “smoked by Windows Phone”, with this logo even printed on a bunch of popular T shirts at MWC. Well, now a Galaxy Nexus owner won the challenge! 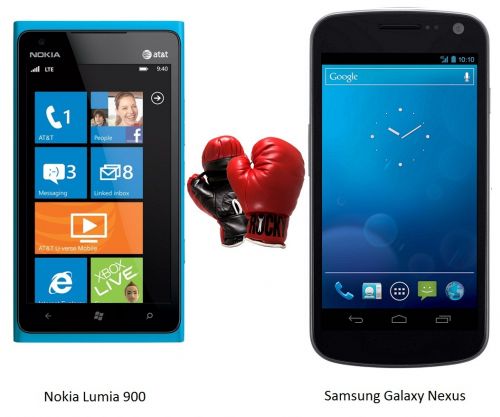 Sahas Katta, a fan of the Windows Phone design went to his local Microsoft store and challenged WP to a dual with his Galaxy Nexus. The speed test was the focus here and Sahas came out on top, winning the challenge. Usually the tests are heavily customized so Microsoft’s services would win, but the Galaxy Nexus handled at least one of them. The Microsoft Store assistants required the competitor to show the weather in two different cities.

While the Windows Phone unit on hand had weather tiles for the two cities pinned to the Start screen, it still took a couple of milliseconds more to unlock the display and check out those tiles. Meanwhile, Sahas deactivated the lock screen on his Galaxy Nexus and simply had two weather widgets on his Android homescreen. So, he only pressed the power button of the first Android 4.0 phone and the weather widgets popped up! Of course this is faster than a Windows Phone unit that has been locked… Microsoft’s employees didn’t want to acknowledge the win and offered the excuse that the weather had to be shown in two different cities in two different states…

Then Sahas complained about this on the web and eventually Microsoft’s Ben Rudolph, the main man behind the Smoke campaign apologized to the winner and promised a rematch, plus they offered him a free laptop and smartphone for the trouble at the MS store.