A couple of days after the iPhone AppStore augmented reality app for Paris Metro Subway went loose, the first apps of this kind also made it to the US. The launch of such software was believe to be scheduled to coincide with the release of iPhone OS 3.1, but we don’t mind having augmented reality already available in the US. 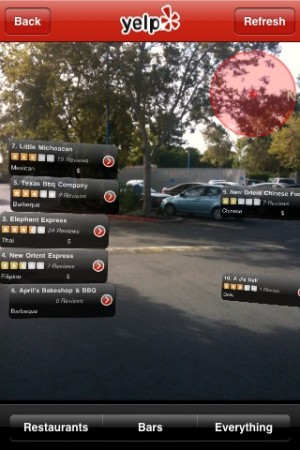 Turns out thatdevelopers “sneaked” AR features into the Apple AppStore through app updates, without the iPhone maker’s approval. Yelp premiered the augmented reality apps in the States, through its latest update, that brings an AR feature called “Monocle”. If you shake the iPhone 3 times, Yelp enters the “Monocle” mode and you’ll see info overlaid on the camera’s viewfinder in real time.

Keep in mind that it takes finesse in order to trigger this feature, rather than brute force, you should try various methods of shaking the handset, not just one. In the end you’ll find the AR feature… or not.