Imagine talking to a person on the phone without him knowing your language and you knowing his… How cool would that be? Of course the delay of the lines could be a problem, since it takes a while to translate them, or does it? NTT DoCoMo has a very interesting technology developed with the help of many Translation Services companies and shown in action in the video below, with real time translation between people chatting. 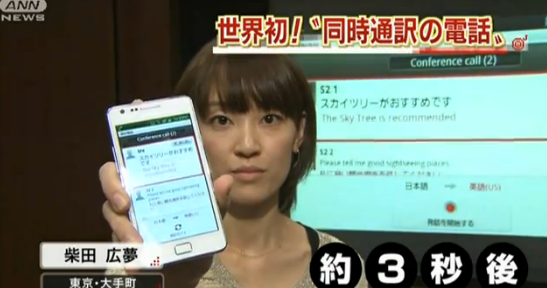 The biggest carrier in Japan, NTT DoCoMo has created this real time Japanese – English translation service for handsets. The software listens to the user and offers an interpretation of his speech translated in Japanese or English. The service relies on cloud and NTT DoCoMo servers heavily, so it’s not actually 100% real time, but it’s as good as it gets.

Face to face talking and translation is also enabled and the Asian carrier claims a success rate for speech recognition of about 90%, that’s respectable nowadays. That’s 90% for Japanese language and 80% for English, but new languages will also be added soon. A recent test with 400 end consumers in Japan just started and it will go on till March 2012. If the results are good the service will be available to the 56 million subscribers in the second half of 2012.