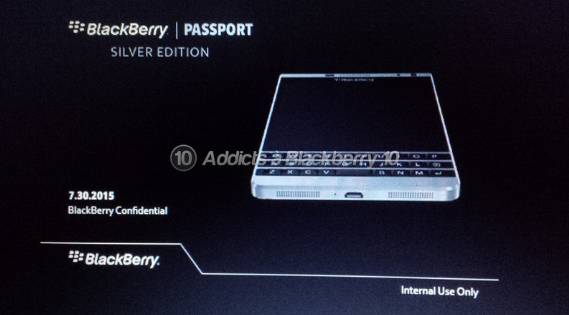 BlackBerry Dallas is a handset that has been leaking quite a lot over the past months and it has even reached the FCC at some point. The device gets new info leaked today, saying it may end up also branded Passport Silver Edition.

A leaked slide presents this official name, which basically relegates the Dallas to the status of a derived version of the Passport. Considering the specs and design are close to the famous ultra wide phone from last year, the approach was expected. The main difference here is that the Dallas is made of less premium materials, which make it more affordable.

Rumors talk about a 4.7 inch 1440 x 1400 pixel display on board and a Snapdragon 801 CPU, plus a 13 MP back camera and a front 2 MP shooter. A 3450 mAh battery is also rumored, plus 3 GB of RAM. BlackBerry 10.3 OS is said to be preinstalled and seeing how this model has been certified not only by the FCC, but also by the Malaysian, Singaporean and Indonesian authorities, a launch is bound to follow soon.