There’s a fresh Blackberry in town, a leaked model courtesy of Rapidberry, who published some interesting details about a new BB 10 OS model, apparently headed for Verizon. The name of the newcomer is BlackBerry Laguna (R069) and we’re dealing with a phone that measures 9 mm in thickness and packs a Qualcomm Snapdragon MSM8960 dual core CPU. 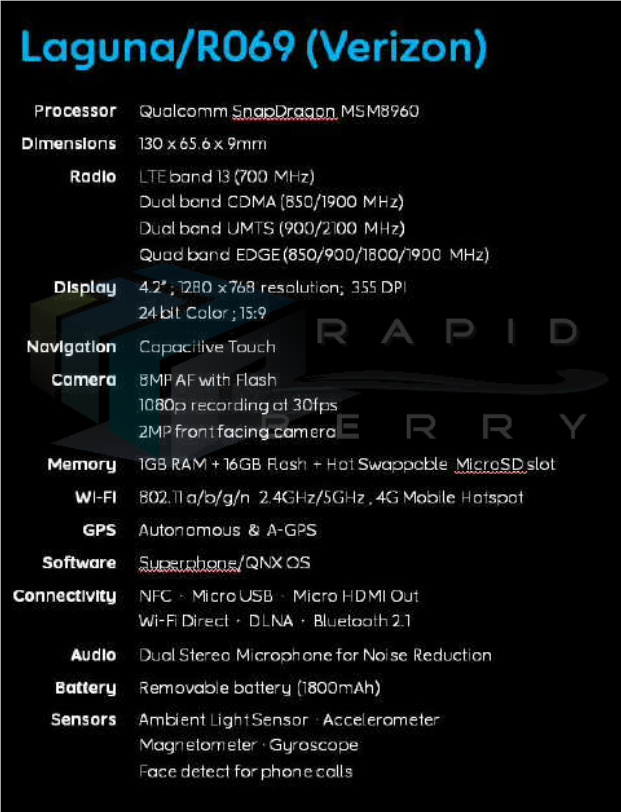 There’s also LTE connectivity on board, as well as dual band CDMA and UMTS. The device packs a 4.2 inch display with a 1280 x 768 pixel resolution and 15:9 aspect ratio, if there is such a thing. At the back of the BB 10 OS device there’s an 8 megapixel camera with autofocus and LED flash, plus 1080p recording at 30 FPS, while at the front there’s a 2 megapixel camera. Other specs include 1 GB of RAM, 16 GB of flash storage, a microSD card slot (hot swap), WiFi 802.11 a/b/g/n and GPS.

NFC, micro HDMI, WiFi Direct and DLNA are also here, as well as Bluetooth 2.1 and a removable 1800 mAh battery. Seeing how a recent leak of info said that RIM and Qualcomm have quad core Snapdragon S4 Pro phones planned for 2013, the Laguna sounds rather like a midrange model, don’t you think?