On Thursday the guys in Redmond finally launched a native Facebook app for Windows Mobile phones, a software they promised the world back in March. While Facebook on BlackBerry, Palm and the iPhone look exactly like their PC counterpart, this software is different, but still recognizable. 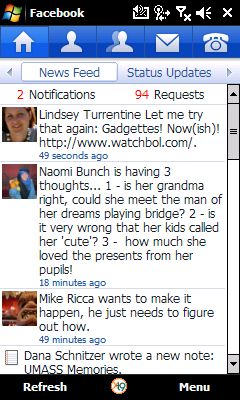 The features we know and love are present (news feed, photo updates, notifications, status, friend requests), plus a couple of mobile-only functions. The app will allow you to upload a photo from your album or take a new one, do the same with videos, but the most useful and original feature of the software is the phone book, gathering the names and numbers of buddies that also included their phone numbers in their profiles.

This option will allow you to call or text those buddies, maybe even send them a message via Facebook. Microsoft’s developers worked with Facebook’s specialists, just like in the case of BlackBerry and Palm apps, using APIs for development. That’s probably why each Facebook version is different when compared to the one on another mobile platform.