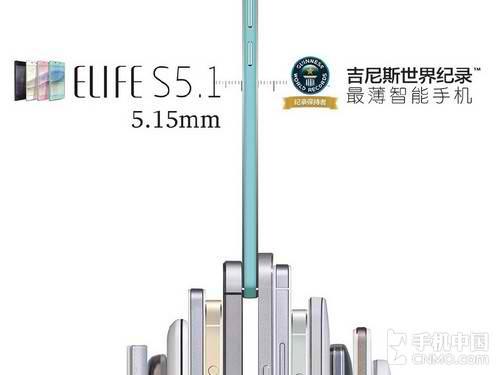 As you may know, Gionee is that Chinese producer that managed to become a lot popular lately thanks to its slimmest devices like the Elife S5.5, a smartphone that measures just 5.5 mm in thickness. After the launch of this one, Gionee announced another one that is even slim, a device called Elife S5.1 (5.15 mm).

Today, we get to know that the Gionee Elife S5.1 was certified as being the thinnest smartphone in the world by the Guinnes World Records thanks to its 5.15 mm body. Also, the previous device Elife S5.5 have won this title too when it was released on the market. However, the Gionee Elife S5.1 is a mid-range phone compared to the one that measures 5.5 mm.

In terms of design, Gionee Elife S5.1 comes with a double-sided glass panels, and a metal frame around it. Among the specs of this one we find a 4.8-inch Super Amoled HD display, a quad-core Qualcomm Snapdragon processor, a 8-megapixel camera and Android 4.4 KitKat as default operating system.