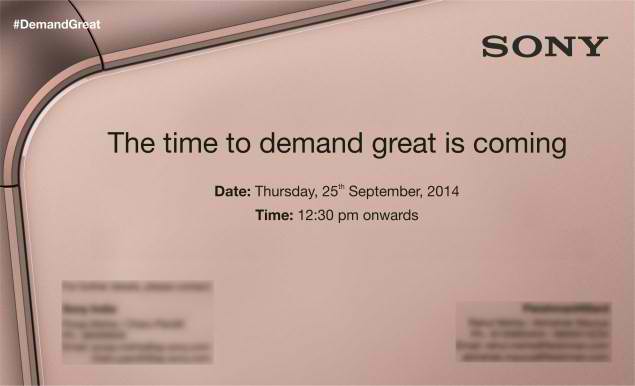 Officially announced this year at the IFA 2014 expo, Sony Xperia Z3 and Xperia Z3 Compact will be soon launched on the Indian market too. More precisely, Sony will prepare a press event on September 23 in New Delhi, as the invite let us know.

Among the new range of devices from Sony we also expect to see some other products like the Xperia Z3 Tablet Compact, the new budget Xperia E3 smartphone, new wearable devices and theQX lens-style cameras for smartphones. We get to know that the Xperia E3 has already been launched in India earlier this month at $ 11990.

As you may know, the new Xperia Z3 smartphone comes with similar specs as its predecessor. Among its specs we find a 5.2-inch Full HD Triluminos display, a quad-core Qualcomm Snapdragon 801 processor clocked at 2.5 GHz, 3 GB of RAM, a 20.7 megapixel main camera with autofocus and LED flash, stereo speakers and IP68 certification.