The folks of laptopmag have a very interesting initiative, that’s both related to the ongoing FIFA World Cup 2010 and Android. They’ve put together an “Android Cup Game”, making the best handsets with Google’s OS on board compete as seen in the chart below. Today it’s HTC Hero and Motorola Backflip’s turn to compete. 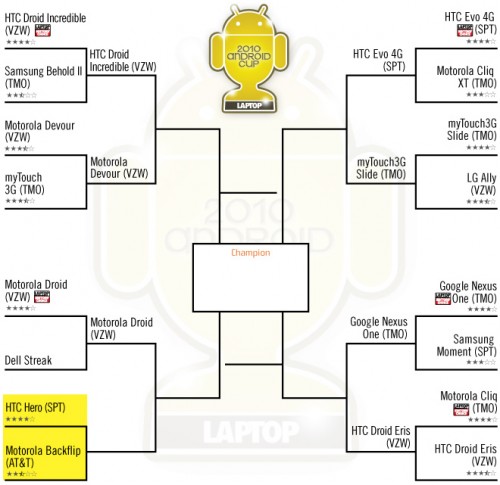 Predictably enough, HTC Hero wins the challenge, in the last game of the first round. In the other rounds, the Droid Eris beat the Cliq and the HTV EVO 4G beat the Cliq XT. AT&T’s Motorola Backflip took on Sprint’s Hero, only to come out defeated. For starters, the Moto phone received negative reviews, because its unique reserve flip design is not as usable as the handset’s maker had hoped it to be.

The setup involves a small touchpad behind the screen, which is very uncomfortable and tough to use. Backflip also comes with a 3.1 inch 480 x 320 pixel touchscreen display, a 528 MHz Qualcomm MSM7201A processor and the Motorola MOTOBLUR UI. Meanwhile, Sprint’s HTC Hero was seen as the best Android phone in the US back in September when it was launched.

Hero features a 3.2 inch capacitive touch display, with a 480 x 320 pixel resolution, the same processor as the Backflip and 512MB of ROM. The advantage here is the intuitive soft keyboard on the device, aided by a haptic screen. At the back there’s a 5 megapixel camera, with the drawback of lacking flash. HTC’s phone now costs $99, just as much as Moto Backflip, but the public’s favorite is certainly Hero.