Motorola and Verizon have just announced officially the Droid X handset, pictured below. This 4.3 inch smartphone comes with HDMI out and DLNA, plus VCAST, Blockbuster downloads and an 8 megapixel camera. It’ll debut on July 15 and it’ll cost $200, after a $100 mail in rebate, with a standard unlimited $30 data plan. 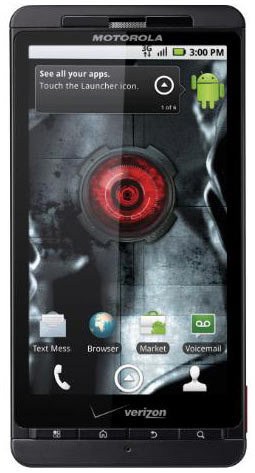 Motorola Droid X’s screen supports a 854 x 480 pixel resolution and we have to mention that the smartphone also features 720p video recording, a 1GHz TI OMAP processor, 8GB of internal storage, a microSD card slot, a multitouch keyboard with Swype and three mics (for video and noise suppression). Android 2.2 will be available on the handset in “later summer” and you’ll even be able to use the Droid X as a WiFi hotspot for up to 5 devices.

Moto’s new toy will support Exchange, Gmail Enterprise and Flash 10.1 when Froyo arrives. MOTOBLUR is still on board, but with dramatic changes, which is good news for all the folks who disliked the UI till now. Expect hands on vids to surface on the web soon.

[via mobilecrunch and Gizmodo]