After seeing the HTC Kingdom and HTC Bliss leaked cases last week, now we catch a glimpse of some new cases, compatible with the HTC Omega and the giant HTC Eternity. We say giant because this previously leaked model appears to sport a 4.7 inch display. 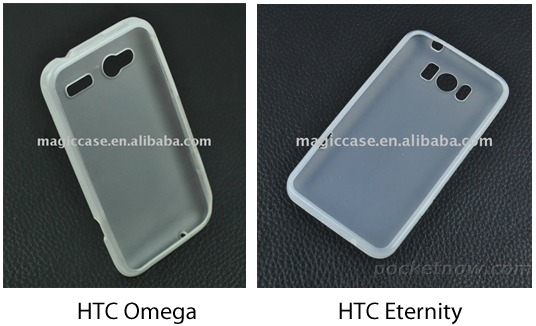 Also, both the Omega and Eternity are supposed to run Windows Phone 7 on top of a single core 1.5GHz CPU. The camera cutouts on the Eternity looks to fit the leaked image of the handset that appeared last month. As far as the Omega goes, this HTC model is supposed to sport a 3.8 inch display and 8 megapixel camera.

Eternity might also come with DLNA, according to rumors. Now with the whole lineup from MWC 2011 revealed, we have to see some new products from HTC, right?