Home Technology Human Brain Being Reshaped by Intense Touchscreen Use, According to Study 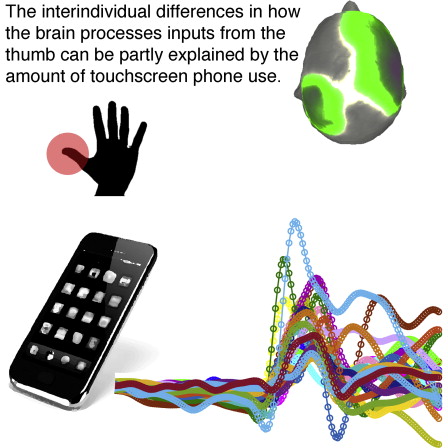 Extensive use of smartphone touchscreen has changed the way the brain relates to the tips of our fingers and our sensory experiences. The info comes from a Current Biology study, that shows some very intriguing facts.

According to neuroscientists from the University of Zurich and ETH Zurich smartphones have proved how the everyday life in the modern world is able to shape the human brain. The brain is known for its plasticity and the repetitive gestures are useful to assess its evolution. Smartphone growth has changed the way we use our thumbs on a day to day basis. The human brain now “knows” to link finger input to accessing a huge amount of content, so it increases brain activity, when thumbs enter action.

Electroencephalographies were performed on smartphone uses and feature phone users and each set of test subjects had their brain response analyzed. Electrical brain activity was enhanced when the thumb, forefinger and middle finger were being touched in the case of the smartphone user. The level of activity in the cortex is also directly proportional to the intensity of the phone use.

The tip of the thumb has actually become sensitive to the various fluctuations of the phone use. So, not only we shaped technology, but it also shapes us… Fascinating!