The iPhone’s software will be from now on free of NDA (Non-Disclosure Agreement) covering. It was just about time this would happen, as Apple’s transparency on the iPhone’s software and willingness to collaborate with developers has been very flimsy and causing dissatisfaction. 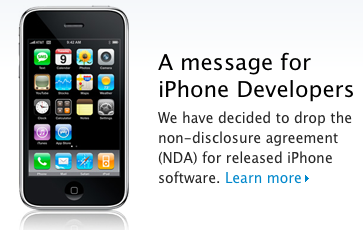 Apple explained their choice as being the result of their desire to protect the software from other people stealing it. It looks like the NDA has asked for a lot of extra efforts from the developers and on any other looking to improve the iPhone. All future released software will come free of this.

Developers should expect to receive a new agreement without an NDA covering released software in about a week. The agreement will continue to apply to unreleased software and features, but end at the moment when the applications are sold with the iPhone. Apple seems to be selling their successful device through the principle of try-error, as they have changed their minds in the past too, when their strategy proved to be wrong.