Verizon’s latest LG Chocolate phone, the Chocolate Touch won’t be borrowing design traits from the very hot LG BL40, as we’re previously assumed. Although both handsets are modern models from the Chocolate series, they don’t have many resemblances. 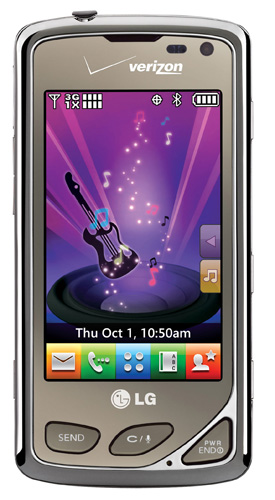 LG Chocolate Touch stays true to the legacy of the series, being a music phone, as shown by features like FM radio, dedicated music keys, stereo Bluetooth and a great equalizer created by Dolby Mobile. There’s also a “Join the Band” feature on board, allowing the user to add his touch to the music he’s listening to, by using a drum kit displayed on screen.

The handset also packs a 3.2 megapixel camera, a full touch display and it’s available starting today, for $79.99 on contract, after rebates.