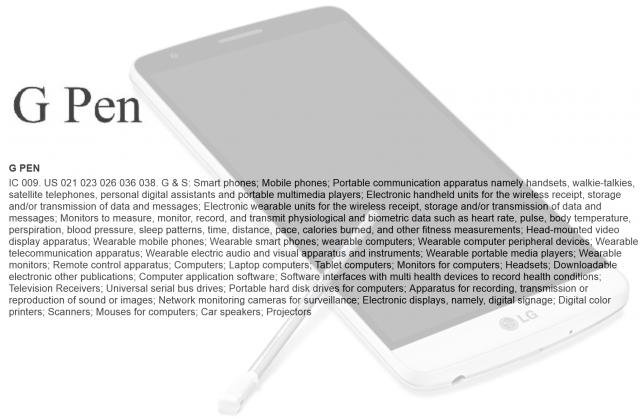 A few hours ago we found out that LG Electronics could quit launching devices from the G Pro range, and now, through a new report we get to know that LG just received trademark for “G Pen”. Taking these two thing in consideration, there might be a chance that next year to see a reborn of the G Pro range into a G Pen phablet.

As we already know, this year, LG launched a device with stylus, more precisely the LG G3 Stylus, a 5.5-inch low-end device that brings in the package a stylus and that uses the design that LG’s flagship from this year.

However, the document that attest the trademark doesn’t reveal the upcoming device that LG is going to released, being suggested a lot of electronics devices, from smartphones, tablets. What do you think? Will LG Electronics reintroduce a phablet next year under this name, instead coming with a new G Pro one?