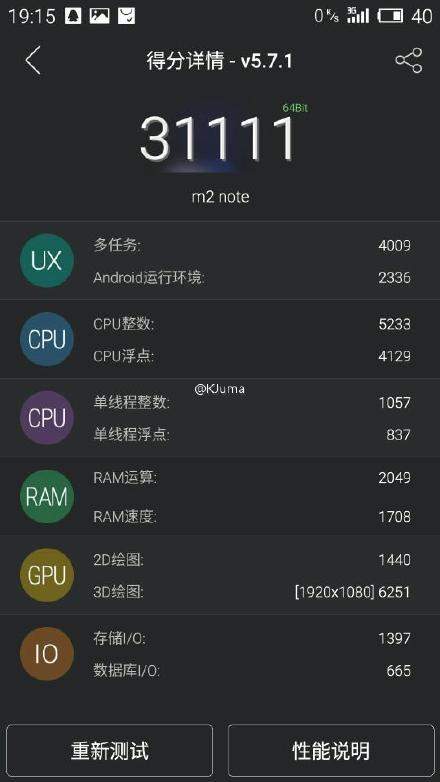 A couple of weeks ago, Meizu launched in China a new smartphone device called M2 Note. As its name suggest, we’re dealing with the successor of the popular M1 Note, a 5.5 inch phablet device that arrived on the market with a great price tag and pretty amazing specs. Even if its new, it seems that the performance remains pretty much the same as we get to know today.

Through a screenshot shared on the Chinese platform Weibo, you can see how well is doing M2 Note in AnTuTu, a well-known benchmark app. Helped by an octa-core Mediatek MT6753 processor clocked at 1.3 GHz, 2 GB of RAM memory and a Mali-T720MP3 GPU, Meizu M2 manages to get 31.111 points.

This score isn’t the greatest as its predecessor obtained 40.000 points in the same benchmark test. In case you don’t know, M1 Note comes with an octa-core Mediatek MT6752 processor that is clocked at 1.7 GHz, cores that made the difference. From what AnTuTu reveals, it seems that the new phone isn’t such a big improvement. What do you think?