AT&T kept its promise and launched Motorola Atrix HD this weekend, priced at $99.99 on contract. The handset comes with Android 4.0 ICS preinstalled and packs a 4.5 inch HD display. In other news, Samsung Galaxy Nexus in the Sprint version now also costs $99.99. 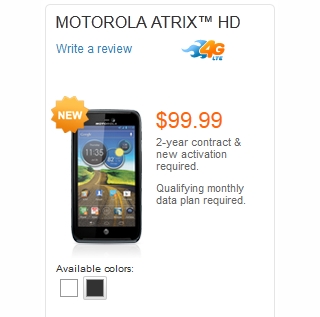 Back to the Motorola Atrix HD, this newcomer packs LTE connectivity, 1GB of RAM and a 1.5 GHz dual core processor. Also on board there’s an 8 megapixel rear camera, 1.3MP front cam and Kevlar fiber layer at the back. The handset can be purchased online at AT&T or in carrier stores all over the USA. The Atrix HD was rumored for a long time, so it generated quite a bit of hype surrounding it. Will it live up to that? We’ll just have to wait and see.

It’s interesting to notice the evolution of the Galaxy Nexus pricing, that went from $199.99 on contract to $149.99 and now $99.99. With everyone speculating about the iPad Mini and iPhone 5, I wonder if this price reduction means that we should add another speculation to the list: a new Nexus phone.