Verizon’s upcoming smartphone, Motorola Droid 2 scored really high in a couple of benchmark tests involving Android 2.2 Froyo. Its score in the Quadrant benchmark was 1299, higher than the one of devices like HTC Desire, Samsung Galaxy, Moto Droid and HTC Magic. 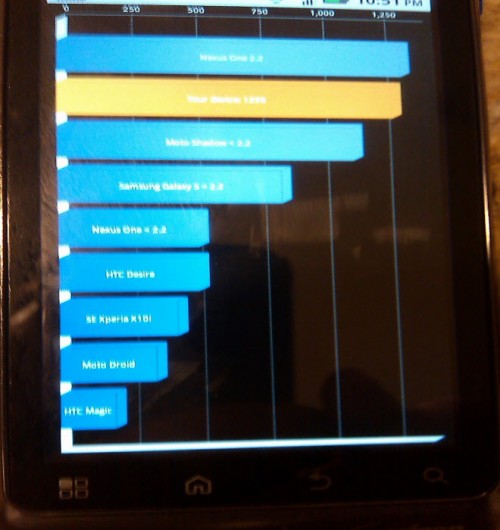 Droid 2 is pretty good as far as memory management is concerned and also its experience is far from laggy, plus the eye candy is present, too. The benchmark mentioned above also gave us some info on the handset’s features and pre-installed software. For example, we learn that the Droid 2 unit that was being tested features 512MB RAM (200MB available on boot), an OMAP 1GHz CPU (scales between 300MHz and 1GHz) and a microSD card slot under the battery.

A 5 megapixel camera is also on board, as well as 8GB of internal storage, six sensors (3 axis accelerator, 3 axis magnetic, temperature, proximity orientation and light sensors), Swype typing and Froyo with MOTOBLUR UI.