After the whole Droid RAZR and RAZR MAXX craziness, here comes the Droid 4 to give the guys and gals who love QWERTY + touch combos a chance. We’ve just found out that Verizon will sell the Motorola Droid 4 for $199.99 on contract, or so says a recent MAP list that Droid-Life uncovered. This kind of pricing is normal for Verizon and shouldn’t surprise anyone. 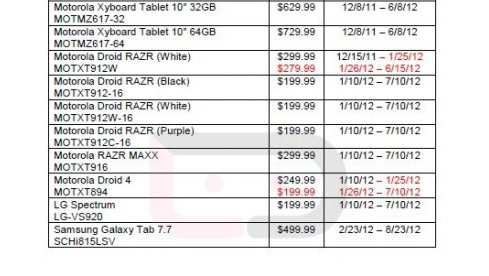 The device was also showcased at CES 2012 early this month and some may have expected this LTE phone to actually be available for $299.99 like other previous 4G phones from this carrier. However, with the precedent of the LG Spectrum priced at $199.99, even this low price point doesn’t surprise anymore. For this amount you get a well spaced 5 row QWERTY keyboard on the Droid 4, as well, as a 4 inch QHD display and a 1.2GHz dual core processor and 1 GB of RAM.

The handset measures half an inch in thickness and comes with 1GB of RAM, 16 GB of internal memory and an 8 megapixel camera. That’s pretty much everything we got on the RAZR, except for the keyboard and screen size. Motorola Droid 4 also has the advantage of being able to roam overseas, which is a premiere for a Verizon 4G LTE phone. Sadly, we have no release date for this product, but I can bet that you’ll get it around Valentine’s Day.