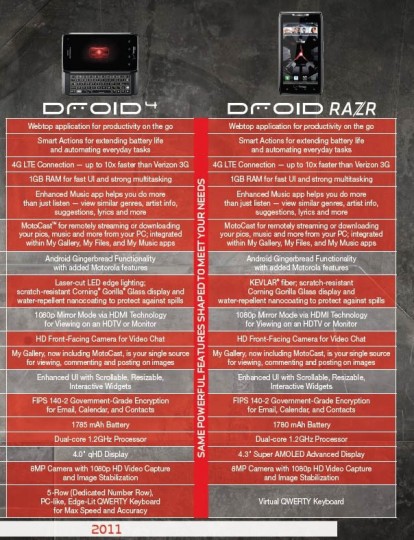 They are as related as it gets, since the recently rumored and not yet announced Droid 4 is basically a Droid RAZR with a sliding keyboard and minor modifications in the hardware area. They both support the Webtop application mode for productivity on the go and both support 4G LTE connectivity, to the joy of Verizon Wireless, probably.

Droid 4 and the new RAZR come with 1GB of RAM, Android Gingerbread and the promise of ICS updates in the upcoming months. 1080p mirror mode via HDMI is another thing they have in common and the handsets also share a HD front camera, and a dual core 1.2GHz processor. The battery on the Droid 4 is a 1758 mAh unit, while the RAZR comes with a 1780 mAh battery, so the tweak is minimal.

There’s also a change in screens, since the new Motorola Droid 4 comes with a 4 inch qHD display, while the RAZR adopts a 4.3 inch Super AMOLED Advanced Display. Back to the common features, there’s an 8 megapixel camera with HD video capture and image stabilization and separating the two once and for always there’s a 5 row illuminated keyboard on the Droid 4. Which one would you pick?