Motorola Droid X aka Xtreme/Shadow got previewed quite a lot over the past weeks, but this is not longer a blurrycam experience, as the device has been leaked in the very clear picture below. This secret phone is apparently owned by Gadget University, that details the device’s specs, after the break. 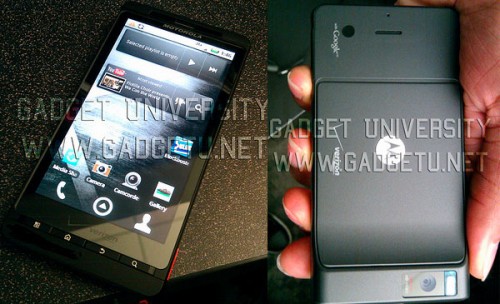 The site mentions that Droid X comes with a 4.3 inch IPS screen (some said 4.1, depends on the source), HDMI out, HD video recording, a 1GHz Snapdragon processor, Android 2.1 and a brand new version of the MOTOBLUR UI (apparently called Ninjablur).

Hardware navigation buttons, as well as a supposed 750MHz processor are included and we learn that this handset will be coming to Verizon next month.