Here we are with a new picture of what looks like a Motorola slider phone, on Sprint. It appears that Moto and Sprint are doing tests together for this sliding smartphone and the pic comes from user Va1ha11a in the Android Central Rumored Devices forum. Apparently, the phone is a test device, not the final unit. 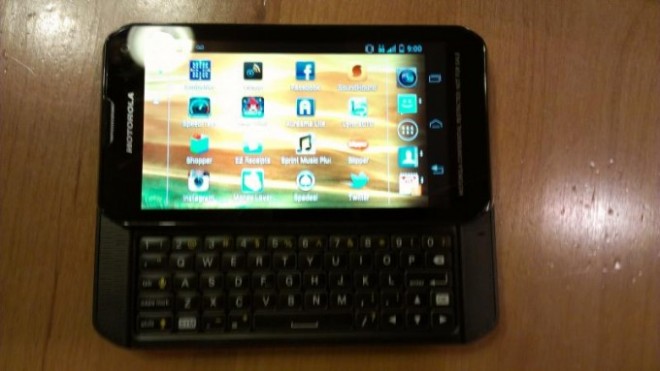 When I saw this Android 4.0-based unit, the first thing that crossed my mind was that it’s a Motorola Milestone unit, a next gen one. If I’m not mistaking we’ve stopped at Milestone 3, with a Milestone 4 rumored for unveiling at MWC 2012. Since Moto’s presence at MWC was feeble, that didn’t happen. This model supposedly comes with a qHD display and you can see that it has the Sprint Music app in the drawer. One can also assume that this is a LTE phone and I can’t help but wonder if this is that Intel CPU-based device, that Motorola has been bragging about for a while now.

Intel and Moto announced a multi year agreement in January and they should deliver something now at mid-year. Aside from the sliding keyboard, this is a buttonless affair, with 3 virtual buttons for browsing and such, like Google usually recommends for Android 4.0. So, Milestone 4 or not?