September will be a very interesting month, with an Apple event supposedly scheduled on the 12th and a Microsoft + Nokia event on the 5th. Now there’s another interesting event also on the 5th, this time one that Motorola is part of and they already sent out invites setting the theme of the gathering as “HD device launch”. 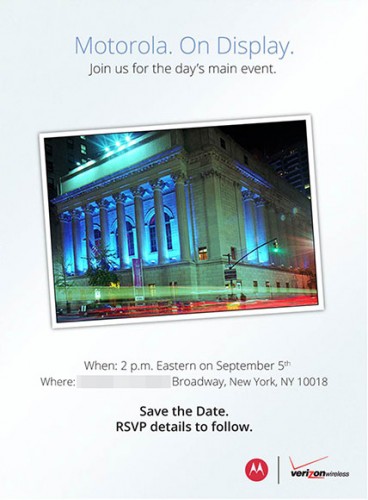 It’s probably time for the official debut of the Motorola Droid RAZR HD, that has been leaked too many times already. With the invite card saying “Motorola. On Display”, it’s clear that we’ll get a showcasing and that will take place in New York. The event will be held in cooperation with Verizon, so the carrier will most likely sell the Droid RAZR HD in the future. Usually such events unveil either a set of devices or maybe a single flagship, but considering the recent leak of a Droid RAZR Mini, I can’t really say if it’s one or two new models.

It’s interesting that Verizon is participating, since they’ll have their hands full with the new iPhone in the following two months, so will they find room for one more flagship, such as the Droid RAZR HD? Especially considering both the new Moto phone and the Apple iPhone 5 are supposedly LTE handsets.