Last week LG unveiled all its plans for MWC 2012, including both the huge 5 inch Optimus Vu and the L series phones. These ones are the L3, L5 and L7 and now we’re here to detail the lower end unit of the series, the L3. The device was caught on camera at MWC 2012, in Barcelona at LG’s booth. It’s a budget phone with a tiny display, tiny resolution, mediocre camera and a rumored price tag of 150 euros. 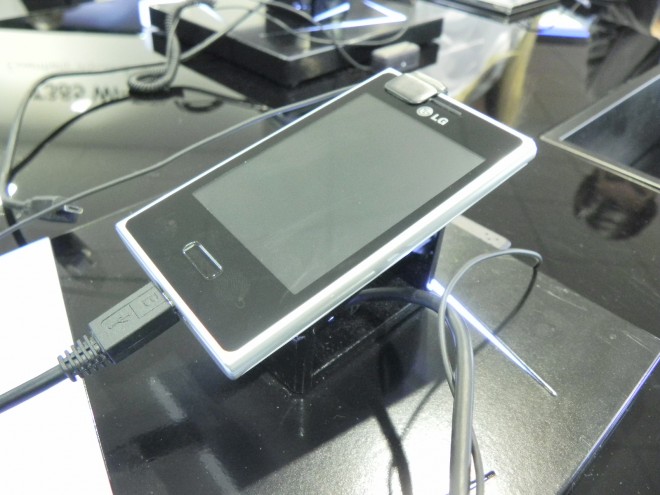 The handset still keeps the already trademark squared design of the latest LG phones, including the Optimus Vu, LG Optimus LTE Tag and the entire L series. There’s a metallic edge (or plastic that looks like metal) around that plasticky case, that feels tougher at the back, for extra grip. This device comes with a soap bar form factor and seeing its specs makes me think of a rival for the Samsung Galaxy Mini 2 and HTC Wildfire S. Here are the specs:

LG Optimus L3 runs Android 2.3 Gingerbread with the Optimus 2.0 Lite UI, that doesn’t customize the experience too much. The L3 is expected in the UK at the end of March, so keep an eye out for this model, that will come in a wide range of colours, for all tastes and moods. As shown in the video below, the display may be bright but it tends to get grainy at times. Fancy this budget phone or are you more interested in Samsung and HTC’s offers?