A week ago we saw a leak of a mystery Motorola phone, one that had a bigger display than the Droid RAZR and a similar case design. People said that it was in fact the Droid Fighter handset for Verizon. Now there’s yet another leak, once again the one of a model that seems related to the Droid RAZR. Especially the back side and the camera bulk reminds me of the Motorola Droid RAZR.

The kevlar area is extended on the camera area of the device and there’s also a slight chin at the front. Considering that camera bulk is bigger and there’s a HD inscription in there, should we expect a more potent sensor here, maybe a 12MP one? There’s also a pretty big speaker next to the camera sensor, so this promises to be a strong multimedia offering. The Droid Fighter from last week didn’t seem to have enough room for any buttons, while this model has quite a lot of space available between the chin and screen, so there may be some capacitive buttons there.

The guys of Droid Life mention that this device was mentioned under the codename “Blade”, but that may be something lost in translation from the area “RAZR-razor-blade”. It will be interesting to see the Droid RAZR turning into a family of devices, that already includes the original model and the RAZR MAXX, plus these potential two newcomers. 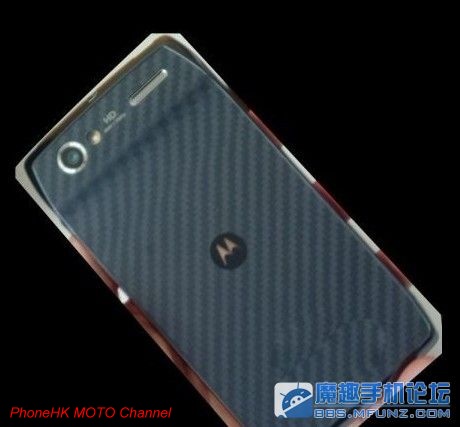