A new Motorola phone has been caught on camera recently and it’s pictured below for you to see. We’re dealing with a brother of the Droid RAZR, apparently, one that has Android 4.0 preinstalled and adopts a bigger display. This model packs a 4.6 inch HD screen and the Verizon branding on it makes me think that it will come to the US first, bearing LTE. 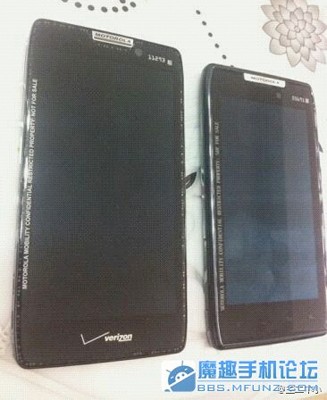 This could be the rumored Droid Fighter unit that appeared in Verizon’s leaked portofolio with a mid-April release date. The device also comes with software-based buttons like those on the Galaxy Nexus, so it’s clearly Android 4.0 material. The photo you see here was posted by Motorola phone leaking forum Phone HK this weekend and as you can see the handset is compared to the Droid RAZR and it’s bigger than that. Supposedly, we’ll also see a 3300 mAh battery on this unit, just like the one on the RAZR MAXX.

It would be nice to get such a big power source, considering it has a HD screen to power up and LTE, most likely. This may become the first Motorola phone to ship with Android 4.0 preinstalled and considering how slow ICS updates are progressing one of the few models to run Android 4.0 at all. I wonder what camera it has… maybe that cool 13 megapixel sensor that the Chinese got on a custom version of the RAZR?