After the unveiling of the HTC Titan and Radar WP7 Mango devices and the announcement of two new Samsung Focus units, now we learn of even more WP7 smartphones. The table below shows 3 new handsets, including two made by HTC and one by Samsung. 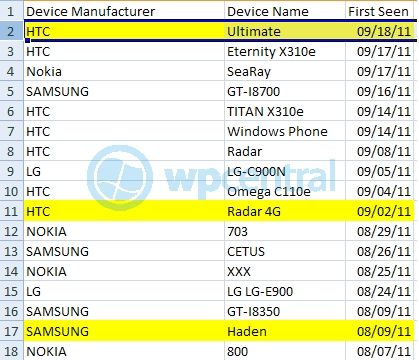 HTC Ultimate and Radar 4G are the newcomers from the Taiwanese company, with the first name being actually the same one adopted by a fan concept back in 2010. Some say that actually this is a HTC Titan unit rebranded for AT&T. HTC Radar 4G should be a HSPA+ version of the handset introduced in London, so it’s not LTE if you’re dreaming about that.

Sprint or Verizon is expected to carry the HTC Radar 4G. As far as the last model is concerned, Samsung Haden reminds us of the name Hayden aka the I870 model, that was spotted a while ago and it’s expected to be a portrait slider just like the Venue Pro. I guess we’ll just have to wait and see what the future holds, especially around the time when Mango is released.