Nokia 500 Fate is the latest leaked handset from the Finnish maker, following a series of models that came out via leaks after the N9 was announced. This week we’ve also seen a S40 handset with 1GHz CPU and now Fate brings the same CPU and Symbian. 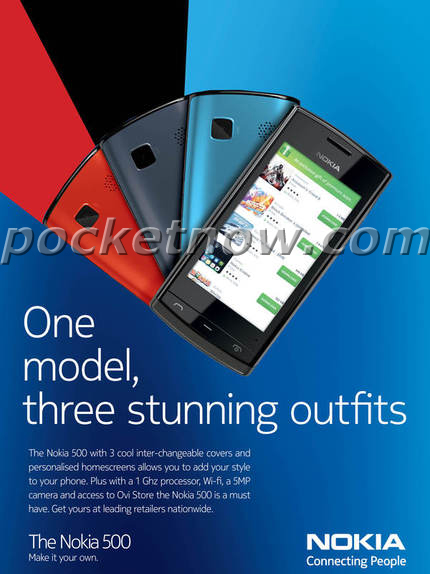 Nokia 500 is expected to run Symbian Belle on top of a 1GHz CPU and also it’ll come with WiFi, a 5 megapixel camera and Ovi Store access. The handset also has 3 interchangeable covers and comes with personalized homescreens. This is the lowest end of the upcoming quartet of new Nokia handsets, that also includes the 600 Cindy, 700 Zeta and 701 Helen models.

They were all leaked a couple of weeks ago, following the hype around the first MeeGo phone and its developer-only counterpart, the N950. All 4 of these Symbian Belle units will feature 1GHz processor and most likely 512MB of RAM or more. We expect a very good price for the Nokia 500, considering it’s the lowest end of the bunch.